The periodization of Chinese history has always been one of the most delicate problems of historians. The Chinese persisted for a long time in the models of their dynasty history and treated each dynasty as a complete unity. Jacques Gernet, however, divides into Antiquity, the Middle Ages, and Modern Times, but at the same time he determines the content criteria that are touched by this type of categorization. 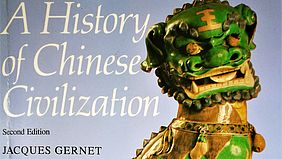 A History of Chinese Civilization

The present volume was translated to English by J. R. Foster and Charles Hartman.

Jacques Gernet's work is Europe's first scientific universal history of China from the beginnings of civilization to the time of the cultural revolution. It is also the first attempt to portray China's history as an integral part of the world's history, not to treat Chinese culture as an exotic, self-contained special form, whose internal structures open themselves only to the initiate, but to the manifold correlations and relationships which developed between Orient and Occident during the last 2000 years.

To write a universal history of China also means, first and foremost, a definition of what one wants to write about. Gernet leaves the beaten tracks of conventional historiography, reverts philosophical and religious factors to their lesser importance. Instead, he takes up topics that have so far been neglected, such as the techniques of dealing with nature, the external contacts of the Chinese Empire, or the cultural contributions of the Mongols to Chinese civilization.

Only those who do not focus solely on political or institutional factors, but rather look for configurations and changes in all fields of activity, trace the morphology of a cultural landscape and elaborate its changes in space and time. Gernet takes up this task and solves it through a multitude of virtuoso methodological approaches, with which he organizes a wealth of empirical data. His work is now available in the second edition and thirteenth reprint and has remained unrivaled to this day.