The Yuanxiao Festival (元宵节) or Chinese Lantern Festival (灯节) is the first important festival after the Chinese Spring Festival (春节), the Chinese New Year, and it is celebrated on the 15th day of the first month of the traditional Chinese lunisolar calendar (农历). According to the Gregorian Calendar, in 2017, the Yuanxiao Festival is on a Saturday, February 11th, 2017. This Lantern Festival marks the last day of the traditional two weeks long Chinese Spring Festival celebrations in traditional China. 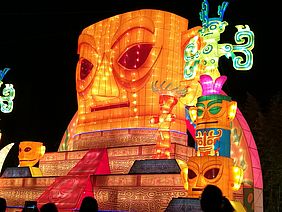 The first month of the Chinese lunisolar calendar is called zheng yue (正月) which refers to the beginning of the recently ascending new year and the declining darkness of the winter. Therefore the first full moonlit night, yuan yue zhi ye (圆月之夜), which is during the 15th night of the first month of the Chinese lunisolar new year, was called yuan xiao (元宵 or 圆宵), where yuan can be translated to round while xiao bears the meaning night.

It is this night when families take out their children to temples and parks traditionally carrying with them simple paper lanterns solving riddles on their lanterns. Nowadays, in modern times, especially in rapidly growing Chinese cities like Chengdu, well known parks organize great light festivals to attract large audiences with their sophisticated light shows, often mixing Chinese tradition or history with other themes.

Each year, such lantern festivals usually have changing themes to amuse and educate visitors. In 2017 for instance, the Jinsha Site Museum Park in Chengdu had the theme "Ancient Egypt".

The Jinsha Site Museum Park permanently exhibits the first major archeological discovery of the 21st century in China. The park is located in the western part of downtown Chengdu. It exhibits up to 3,000 years old foundations of large buildings, sacrificial and residential zones, and burial sites dating back to the Early Spring and Autumn and to the Late Shang Periods. It is the focal archeological site of my research about the ancient Shu people that used to live here in the Chengdu Plain.

Light Show in Chengdu during the Lantern Festival 2017